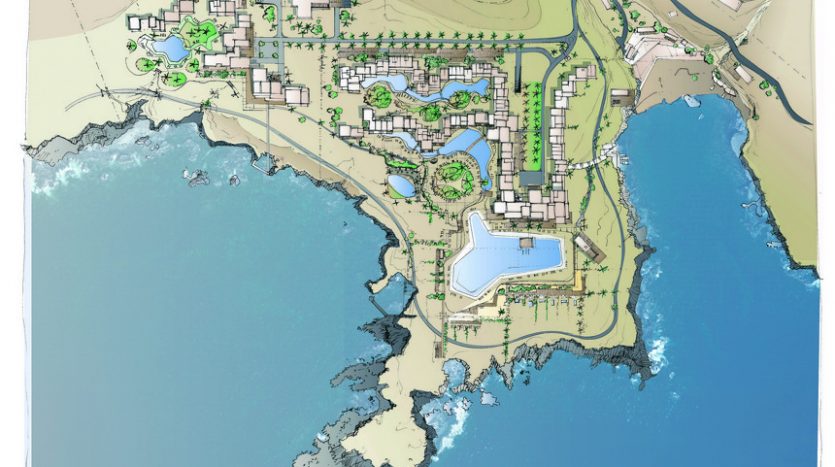 The idea of ​​creating a Hotel da Lusofonia, inspired by all the Portuguese geographies, came from a Portuguese entrepreneur, Pedro Ventura, who already managed the project to evolve to an investment of € 96.5 million in a five-star resort that will be born on the island of Santiago, in Cape Verde, managed by Meliá Hotels & Resorts.

Once approved by the Cape Verdean government, the Meliá Lusofonia Cabo Verde Eco-resort will be located in an area of ​​26 hectares inserted in the broader property of the Santiago Golf Resort. Construction is expected to begin in 2019 for the project to be completed in 2021.

“People still do not know what lusofonia is about in a hotel, it’s a concept that does not exist. It is necessary to explain to a German or to an English this diversity so great that we can offer and that besides Portugal involves Africa, Brazil, Macau, Goa or Timor, with the food of all countries, music, dance, decoration, textiles, handicrafts and real estate itself, “said Pedro Ventura, who joined the Cape Verdean entrepreneur Eugénio Inocêncio to give shape to the Hotel da Lusofonia. They intend to move forward with a 35% equity structure. In addition to these investors, the project will also have as shareholders the construction company Tecnovia and the Americans of the West African Investments Group (WAIG). “We have all the financial engineering elaborated, with the objective of completing all the financing contracts until September 2018,” Pedro Ventura said, noting that in this € 96.5 million project “the financial model is complex” Bank of International Development (BFI) and Eco Bank, in addition to the support of Afreximbank, Jefferies Investment Bank and national banks of Cape Verde.

ACADEMY FOR MUSIC, SPECTACLES OR CONGRESSES
The project includes three hotels totaling more than 600 rooms, whose restaurants, swimming pools or other structures can be shared by guests. One of the units, the Diplomatic Hotel, will be more business oriented and comprises 150 rooms (of which “50 very luxurious”, as Pedro Ventura points out) and one of its main anchors is the Academia de Lusofonia – Música Artes, a multipurpose space which can hold conferences up to two thousand people or music shows, concerts, art exhibitions and thematic fairs. This space will include a studio where musicians and artists from various Portuguese-speaking countries can make recordings, as well as a dance space and an art gallery, “so that all artists can make their artistic productions here and choose this resort as their own. second home”.

In addition to the Diplomatic Hotel, the Lusofonia resort will also feature the 320-room spa hotel, which is more suited to the leisure and family segment, and will operate on an all-inclusive basis. In addition to the one-hectare infinity pool, the equivalent of a football field, the hotel will also have as a relevant attraction the Nha Club, an area of ​​shops with handicrafts and products from all Portuguese speaking countries, as well as a salt water pool, tennis courts and sports spaces.

At the Nha Club, 24 art residences will also be built “so that young people and artists can rent them at symbolic prices and have the opportunity to spread their talents both in the lusophony academy and in the hotels themselves,” according to the promoters.

Turned to health tourism, the Spa Hotel will also have a Lusophony Clinic (whose doctors will be Portuguese or Portuguese speaking countries) and will offer packages in which people can make medical treatments or programs to learn to dance samba or mornas among others.

“We want to create here a unique product of tourist experiences, with all the cultural synergies of lusophony associated with music, gastronomy or even the economic aspect, based on the open values ​​of the people who embrace the Portuguese language”, maintains the investor Eugénio Inocêncio, stressing that the Hotel da Lusofonia proposes to “affirm Santiago as an island of choice for tourism in this archipelago, assuming that each of the ten islands is one of the faces of the tourist diamond that one wants to build in Cape Verde.

The third hotel of this resort will be the Residence, a unit with 160 apartments and the focus more on long-term stays, targeting the seniors or families segment.

At the Hotel da Lusofonia, the interior decoration will be signed by the Portuguese Nini Andrade Silva, as well as other designers from Brazil or Cape Verde. There will also be a place for the garden of lusophony, with the various endemic plants of the Portuguese speaking places, or the lusofonia winery, with wines from these origins. For details of the decoration, “we have been researching the history of the Portuguese in Macau, Goa, Daman or Diu, in the hotel environment we can be in Portugal in the 20th century. XV as in a Mozambican captaincy or in Brazil, “says Pedro Ventura.

The project’s investor emphasizes the Cape Verdean government’s commitment to tourism and “developing an entire Atlantic air hub strategy,” in particular with the privatization of the ongoing TACV carrier. “Tourism will undoubtedly be the engine of the Cape Verdean economy and by 2020 there are already some 1 million tourists expected in this destination.”

Register here! Forgot Password? Back to Login Return to Login